Holy Theophany: beyond the symbols 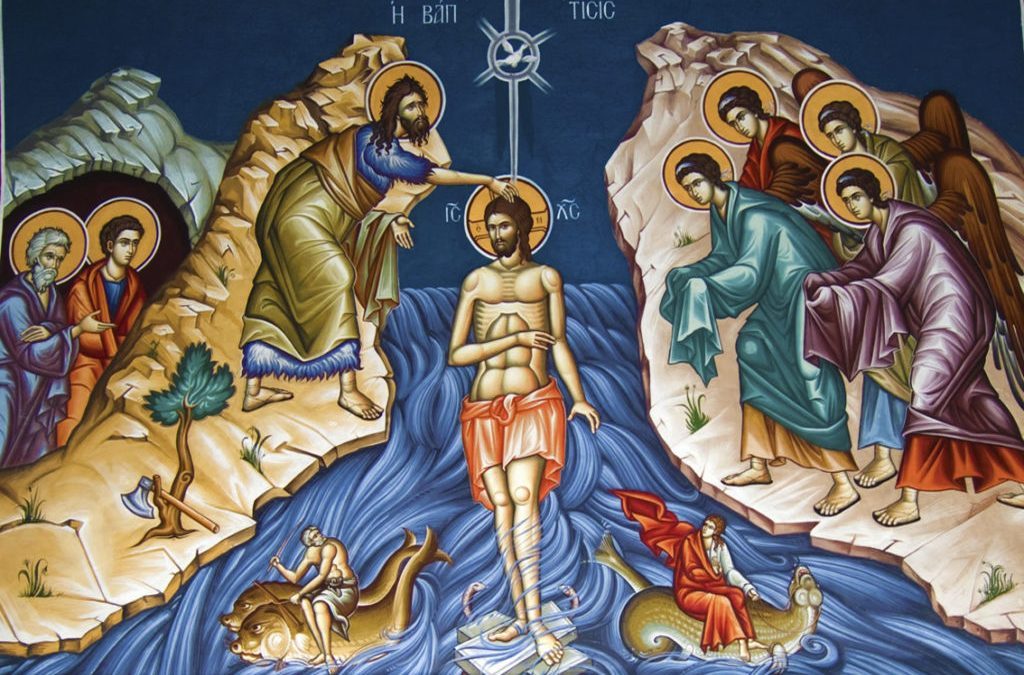 The celebration of Holy Theophany certainly has a most important place in the life of the Orthodox Church. This is because the order of service for the feast sets out in a very expressive way the prospects and horizons which are opened up to every human being through Christ’s coming into the world. ‘Today the things above celebrate with those below and those below converse with those above […] Today the Lord hastens towards baptism, to raise human nature to the heights’. Essentially, this means the opportunity for each person to taste the joy and the glory of God; the opportunity for people to fill their lives with the life of God.

At Christ’s Baptism, the Holy Trinity is revealed: the Son, Who has taken on our human nature completely; the Father, from Whom we hear only His voice; and the Holy Spirit in the form of a dove. In the end, what’s revealed isn’t only ‘Who God is’, but more particularly ‘What God does for our sake’. And what He does is to become human so that we can become gods. This is of incredible importance for the whole of humanity: we’re no longer alone. The very name attributed to Christ -Emmanuel- means ‘God is with us. We have God with us.

In the Orthodox Church, the religious experience is an ecclesiastical event. It’s a relationship and, moreover, a relationship of life. It’s an association between unique, inimitable persons. In this context, we don’t approach God as a supernatural being but as the Person who offers us the chance to defeat anything that overcomes us, anything that makes us weak, anything that subjects us to death and corruption. God became incarnate for our sakes, so that we wouldn’t have to remain in subjection to corruption, that is, to anything that has a sell-by date! Egotistical relationships have a sell-by date: they don’t live, they barely survive, or rather, they’re parasitical.

God is a power Who enriches human existence so that it can be saved, that is so that it can be preserved whole, sound, and intact. When we receive Divine Grace, in essence we’re blessed by enjoying a new way of life in which we overcome every impediment which alienates us, every form of egotism which separates us from others, everything which distances us and cuts us off from our Creator.

The new element which appears with Christ’s coming is the opportunity to approach and taste our uncreated God in the tiniest detail of the created world. This is the reason why the waters are sanctified: it’s not merely a blessing, but the entry of God into human affairs, into what we’re accustomed, with our pious disposition, to calling ‘material’ and ‘vain’. Christ came into the world for all these vain things, so that they wouldn’t be vain any longer, but immortal.

Very often, when we use the words ‘symbol’, ‘symbolic’ or ‘symbolically’ in our everyday speech, we mean that an object, a phrase has led us to deduce something in particular. One example would be the gift we present to our hosts if we’re invited to dinner somewhere. It’s a symbol of friendship, gratitude, affection and so on. This way of thinking has been developed particularly in Western Christianity. Let it be said, in passing, that this remark is not made in any spirit of contention as regards Western Christianity, but simply so that we can understand more fully content which is attributed to symbols of worship within the context of Orthodox services.

Philosophical and theological thought in the West used the terms ‘realism’ and ‘reality’ to denote capacities which belong exclusively and only to the material world. The only reality within the world was held to be the visible one, which is perceived through the senses. For Western, Scholastic theological thought, the revelation of God as a manifestation of Divine Grace in the world is something which goes beyond the capacities and possibilities of the visible world. So it is spoken of as supernatural revelation. But if the reality of the world is restricted to what is perceptible, then we shall have to come up with another concept if we’re to express the reality of God and, also of the religious experience. These reflections led to the coining of the concept of ‘Metaphysics’ to express the content of a meta-reality, beyond the world of visible and perceptible objects. One consequence of this separation was that the religious experience was exiled to the realm of the human spirit while the experience of the senses had to do only with the objects in the visible world, with religion operating only as regards the spirit, given that it was concerned with Metaphysics. The senses could have absolutely nothing to do with the religious experience, since it was their task to deal with the visible world (non-religious and non-spiritual). So the religious experience in Western Christianity was cultivated through meditation, and the experience of visible objects in the world through the exercise of sensual perception.