The Theology of the Feast of Christmas 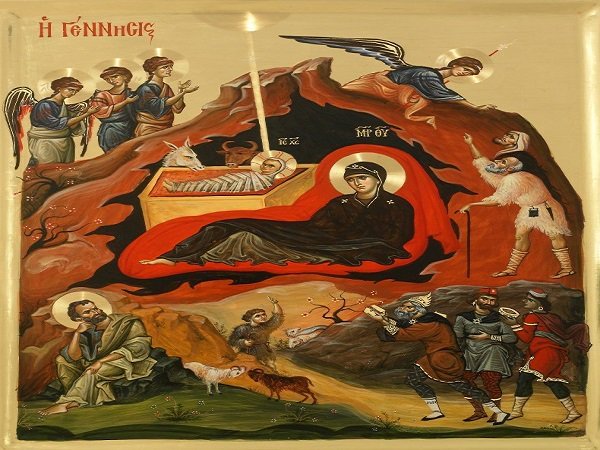 Metropolitan of Gortyn and Megalopolis, Ieremias

The Feast of Christmas today, my Christian brothers and sisters. We celebrate the dogma of our faith, that God became human, a real human person, with flesh, bones, blood and a heart. A person like us in every way, except, of course, as regards sin. This is a very great feast, the mother of feasts, since all the other feasts follow it: the baptism, crucifixion, resurrection and ascension of Our Lord, Jesus Christ. This is why it’s been called the mother of feasts.

At this feast, we see the Son of God, Who formerly, in heaven, had only a divine nature, take on human nature at His incarnation. He is now God and human. Perfect God and perfect human. So, with Christmas, we have two natures united, the divine and human. This was precisely the purpose of the incarnation of Jesus Christ, my beloved friends: to unite our nature with that of God. We call this ‘deification’. From the beginning this was the purpose for which God made us: to be deified.

But you may ask: ‘Is it possible for our nature to be united with that of God?’. Of course, it is, because, at Christmas, we see the divine nature actually united with the human. To the question: ‘Why was the Son of God made flesh?’, we would answer: ‘To show us the way to deification’. So even if Adam and Eve hadn’t sinned, the Son of God would still have become incarnate, in order to declare to us our potential for deification and the way in which we can achieve it.

Let us honour, my beloved friends, the high station for which we’ve been created and let us glorify our blessed Lord, Jesus Christ, Who became incarnate for our own glory.