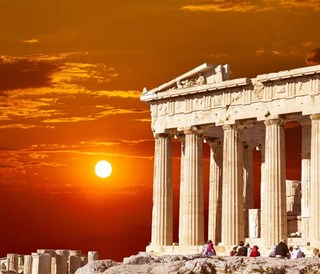 It’s easy to forget just how much credit we owe the brilliant minds of ancient Greece. They are responsible for so many of the world’s early steps into language, politics, education and the sciences, so it’s important to take an occasional, humble look back — way back — in time to ponder these roots and appreciate the ideas that have fueled progress throughout the centuries.

Here are 12 of the richest gifts ancient Greece has given to the world that still impact us today.

It was home to the first recognized historian.

The mission of Herodotus, also known as the “father of history,” was to make sure that “human achievement may be spared the ravages of time, and that everything great and astounding, and all the glory of those exploits which served to display Greeks and barbarians alike to such effect, be kept alive – and additionally, and most importantly, to give the reason they went to war.” Born around 484 BC in Halicarnassus, Herodotus was banned from his homeland by the tyrant Lygdamis and spent much of his time traveling and gathering the stories of others before he returned. He was one of the first writers to not only collect stories of ancient Greece, but also have them survive for others to read.

It’s the birthplace of world-famous mathematicians.

The earliest mathematic theorems, Thales’ theorem and Intercept theorem, both stemmed from the work of Thales of Miletus, recognized as the first of the seven wise men of Greece. Thale’s theorem, which asserts that an angle inscribed in a semicircle is a right angle, lies at the crux of any modern-day geometry class. Following Thales, Pythagoras of Samos coined the word mathematics, meaning “that which is learned.” Some of us may be able to recount the critical geometry theorem named after him as well.

Pythagoras is also responsible for the word philosophy, signifying “a love of wisdom.” During the Hellenistic period, ancient Greece’s leading thinkers began searching for explanations of the world beyond the realm of mythology, instead looking to reason and empirical evidence. From Socrates to Plato to Artistotle, the Greeks expanded the new field into one of research and conversation regarding the role of knowledge, the capabilities of the human senses, and how man exists within the world. Each of these elements have had a direct impact on the shaping of Western thought as we know it.

Its founders designed the initial concept of democracy.

Americans are familiar with the famous description of democratic government by Abraham Lincoln, “a government of the people, by the people, for the people.” It’s less well known that the word democracy comes from our ancient Greek friends.

Demokratia, Greek for “power of the people,” was born in Athens in the 7th century BC. As the city-state’s oligarchy exploited citizens and created economic, political and social problems, Athenians were inspired by the successful, semi-democratic model Sparta had adopted. They turned to lawmaker Solon, who tried to help the struggling majority without disadvantaging the wealthy minority. He gave each Athenian the right to vote, and their assembly the ability to elect officials, pass laws and weigh in on the court’s affairs.

It was the first place to bring trial by jury into the courtroom.

Athens is also the home of the original trial by jury practice. While any one citizen could raise charges against another in an ancient Greek courtroom, they were not allowed to select the jurors for their own trial. Their juries proved far larger than those used today — it wasn’t uncommon for the courts to use up to 500 citizens for any given case, and even to surpass 1,500 when it came to issues of death, exile and property seizure. Each decision was made via majority rule to keep the courtroom as reasonable as possible. The tradition of ensuring that all who serve receive a day’s pay also originated in ancient Greece.

It educated and entertained us with mythology.

When it came to magical storytelling, the ancient Greeks were true professionals. Their myths were used to teach people about gods, heroes, nature, and why they practiced their religion the way they did. The narratives chart the globe, sharing new adventures and life truths with anyone who chooses to listen. From Achilles and Poseidon to Hercules and Athena, these stories have preserved the most colorful parts of Greek history well into the present day.

It brought us the origins of theater.

The early days of ancient Greek theatre began as festivals honoring the god Dionysus, and eventually evolved into an art all its own, once more than one person was allowed to take the stage at any given time. After performing the first known dramatic poetry reading on stage, Thespis became recognized as the first Greek actor and founder of the tragedy genre. Comedy, another genre introduced soon after by the Greeks, relied mainly on imitation. Aristophanes, for example, is most well known for writing comedic plays, 11 of which have managed to survive to the present day. Satyr plays centered around mythology stories with amusing twists.

It created the Olympic games.

The breathtaking city of Olympia is home to one of the world’s greatest — and oldest — sport event traditions. More than 3,000 years ago, the ancient Greeks began hosting the games every four years in honor of the god Zeus. This practice continued for almost 12 centuries until Emperor Theodosius banned “pagan cult” rituals in 393 AD. The first modern Olympic games took place in Athens in 1896.

With religion reigning as a dominant force in ancient Greek society, citizens needed to construct temples that reflected such devotion. The Parthenon and the Erechtheum are just two of the many impressive examples of their age-old architectural knowledge and practice that are still revered today. Flaunting ornate columns and beautiful figures, the temples are designed with particular attention to how all of the components of the structure relate to one another. The precision and skill behind these buildings inspired subsequent architectural concepts and designs that can be noticed in modern landmarks worldwide.

It shared with the world an incredible collection of sculptures and pottery.

The ancient Greeks are also highly revered for their sculpture work. Making use of their natural supply of marble, limestone and bronze, they created visions of their various god and heroes, as well as representations of important historical events and dominant elements of their culture. While pottery was created mainly for everyday use rather than display, many jars, jugs and containers were decorated with similarly themed paintingsthat are beautiful enough to be displayed on museum shelves.

It brought us the explanation of true tranquility.

In her latest book, Thrive: The Third Metric To Redefining Success And Creating A Life Of Well-being, Wisdom, And Wonder, Arianna Huffington writes, “From that place of imperturbability — or ataraxia, as the Greeks called it — we can much more effectively bring about change.” That word first came from philosopher Epicurus and his famous list of principles. He believed that to achieve a state of inner tranquility, we must not attempt to maximize our sense of pleasure, but instead remove unnecessary desires from the equation. The simple parts of life are what keep us in a perpetual state of peace.

It gave us the most comprehensive, meaningful word for “happiness.”

Eudaimonia, a term introduced by Aristotle in his work, Nicomachean Ethics, and a part of the ancient Greek virtue ethics system, is a simpler way of expressing a true, full sense of happiness that includes being part of something larger than yourself. This moral philosophy explores how making wise decisions in life can lead us to a state of well-being that not only benefits us but the world around us. Happiness and meaning become one and the same as we move through everyday life, make use of our practical wisdom, resolve any and all conflicts, and ultimately reach a state recognizable as the good life. Eudaimonia is the ideal for which we all strive.